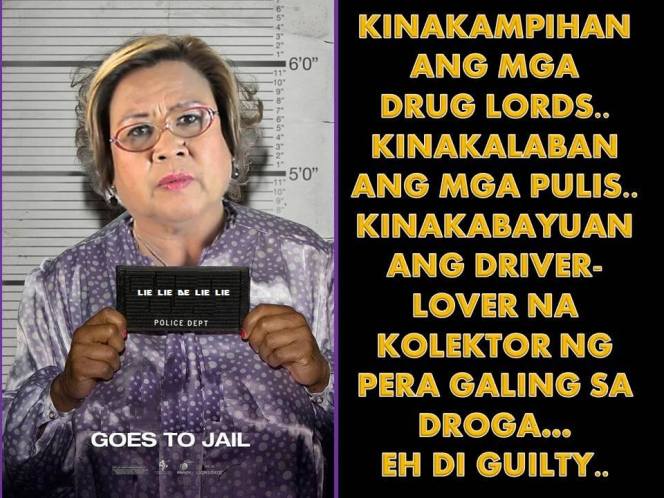 President Rodrigo Duterte, on national TV, asked Senator, and former Secretary of Justice, Leila De Lima to RESIGN from office since the issues of alleged PROTECTION of DRUG LORDS and a LOVE AFFAIR with her driver/bodyguard have exposed her to RIDICULE thus rendering her INEFFECTIVE in her job as well as not being a good example to women. Digong said that if he were placed in a similar situation, he would hang himself. President Duterte announced BOTH problems since De Lima had/has been TORMENTING him for possible links to the Davao Death Squads during the time of De Lima as Commissioner on Human Rights, then Justice Secretary and up to today as Philippine Senator. De Lima has DENIED being a DRUG LORD PROTECTOR in spite of the Duterte comment that it was her LOVER/DRIVER that regularly collected cash from imprisoned Asian TRIAD members at the Bilibid National Penitentiary. She has revealed that she is/was “close” to her former driver but did not elaborate. Digong also named a second De Lima LOVER, this time an MMDA motorcycle cop assigned as her escort.

Senator De Lima said that RESIGNING at this time could be interpreted as a sign of her GUILT in regard to the ILLEGAL DRUG insinuation as well as to be perceived as weak. She said that she is neither GUILTY nor WEAK.  #Duterte #DeLima #DriverLover