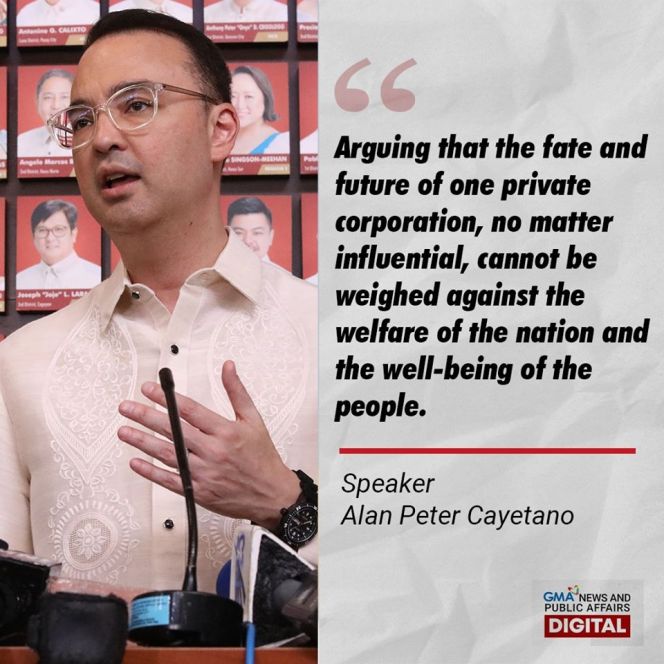 MANILA, Philippines — Members of the House of Representatives would have to skip their midterm break when they deliberate on ABS-CBN’s application for a franchise renewal, House Speaker Alan Peter Cayetano said on Tuesday.

“The deliberations … will continue … until they are finished so no one can say we’re stopping the process, or dragging our feet,” Cayetano said.

He issued the statement even as he withdrew House Bill No. 6732, which would have granted the media giant a “provisional” franchise to operate until Oct. 31 while Congress tackles the 12 bills seeking to grant it a 25-year license to operate.

Cayetano said the issue had become “so divisive” and “so polluted,” that it distracted Congress from more pressing concerns like the COVID-19 crisis.

The House committee is likely to hold two to three hearings a week, Cayetano said, adding that the House should be ready to decide when it comes back after its recess starting on June 4 and after President Duterte’s State of the Nation Address on July 27.

In the Senate, Se­nate Minority Leader Franklin Drilon on Wednesday said Cayetano’s decision to withdraw the bill showed his indifference to the plight of the network’s 11,000 workers.

ABS-CBN president and CEO Carlo Katigbak said on Tuesday the network might retrench personnel starting August since it could not sustain operations without a regular source of revenue.

Union leaders of the company meanwhile said they were staying strong for their coworkers and families despite the looming prospect of layoffs.

—With reports from Marlon Ramos and Miguel R. Camus