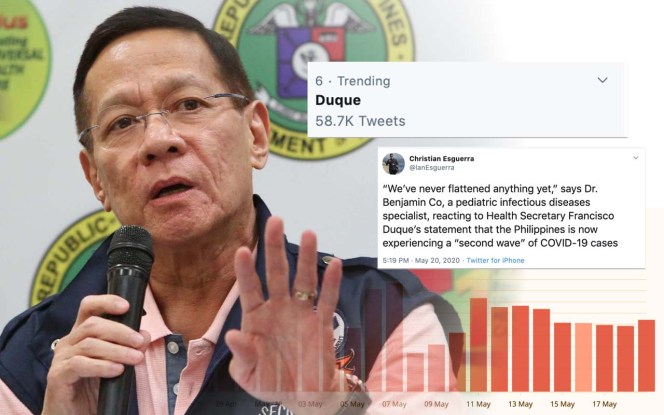 Second wave: A phenomenon of infections that can develop during a pandemic. The disease infects one group of people first. Infections appear to decrease. And then, infections increase in a different part of the population, resulting in a second wave of infections.

MANILA – The Philippines is still dealing with the current stream of COVID-19 infections, contrary to its health chief’s announcement that the country was now experiencing a “second wave,” medical experts said Wednesday.

This next phase in a pandemic comes only with “humongous outbreaks,” and after the first wave of infections has come under control, said Dr. Benjamin Co, a specialist on pediatric infectious diseases who has been monitoring the country’s epidemiological curves based on daily government data.

“We’ve never flattened anything yet,” he told ABS-CBN News. “We’re still dealing with the first wave.”

“I think he’s coming from a definition, probably, that (the curve) was flat from the very beginning then came a few cases,” Co said.

Dr. Tony Leachon, a medical adviser to the government task force on the pandemic, said quarantine measures in certain areas would not have been relaxed if epidemiological data pointed to a second wave.

“It would have been counterintuitive to do that,” he said. “When you say ‘second wave,’ it means you have flattened the first one. We’re still in the first wave.”

The UK-based Centre for Evidence-Based Medicine (CEBM) cautioned against “making absolute statements of certainty about ‘second waves’” about the new coronavirus, which has infected 4.9 million people worldwide.

“We do not know for certain whether COVID will recur in phases, or sporadic outbreaks or disappear altogether,” wrote Tom Jefferson, a senior associate tutor and honorary research fellow at CEBM.