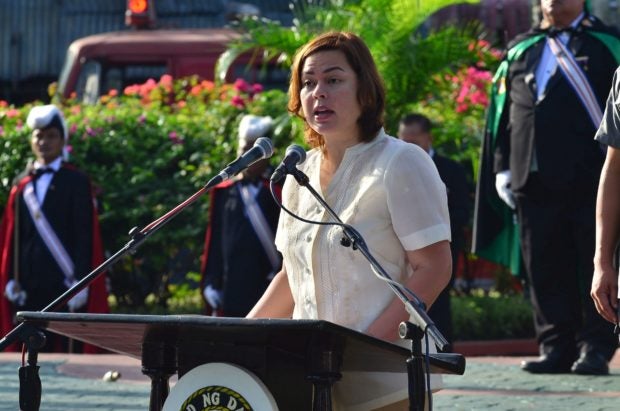 MANILA, Philippines—Malacañang on Thursday hoped for Davao City Mayor Sara Duterte-Carpio’s speedy recovery after the presidential daughter bared she is suffering from a medical condition that would keep her from attending the fourth State of the Nation Address (Sona) of her father, President Rodrigo Duterte.

“We can only pray for her safety and recovery from whatever illness that she is presently suffering. Kung meron mang sakit, we will have to pray for her kung ano mang medical condition,” Presidential Spokesman Salvador Panelo said in a Palace briefing

Duterte-Carpio on Wednesday evening said she will skip he father’s fourth Sona on Monday, July 22, as she is currently on “special medical leave for 60 days.”

“It’s a gyne (gynecological) condition,” she told INQUIRER.net in a text message without elaborating. /jpv

MANILA, Philippines–The Philippine National Police-Criminal Investigation and Detection Group (PNP-CIDG) on Thursday filed Sedition and other complaints against Vice President Leni Robredo and 35 other individuals, including incumbent and former senators and priests after they were tagged in the release of the “Ang Totoong Narcolist” videos.

“I have the honor to submit herewith and requesting appropriate action…the pertinent records of investigation relative to the criminal complaint for Sedition, inciting to Sedition, Cyber Liber, Libel, Estafa, Harboring a Criminal and Obstruction of Justice,” read the PNP-CIDG’s letter-complaint submitted to the Department of Justice (DOJ).

Peter Joemel Advincula, alias “Bikoy,” the narrator in the video was included as respondent in the complaint but the CIDG said he may eventually turn state witness depending on the prosecution panel’s discretion.
Advincula appeared at the IBP office last May and admitted that he is the hooded narrator in the video.

The six-part video series, which was uploaded in various social media platforms linked the family of President Rodrigo Duterte and his close allies to the illegal drugs trade.

Advincula eventually recanted his testimony and said the video was part of a certain “Project Sodoma,” aimed at discrediting Duterte and destabilize the government.