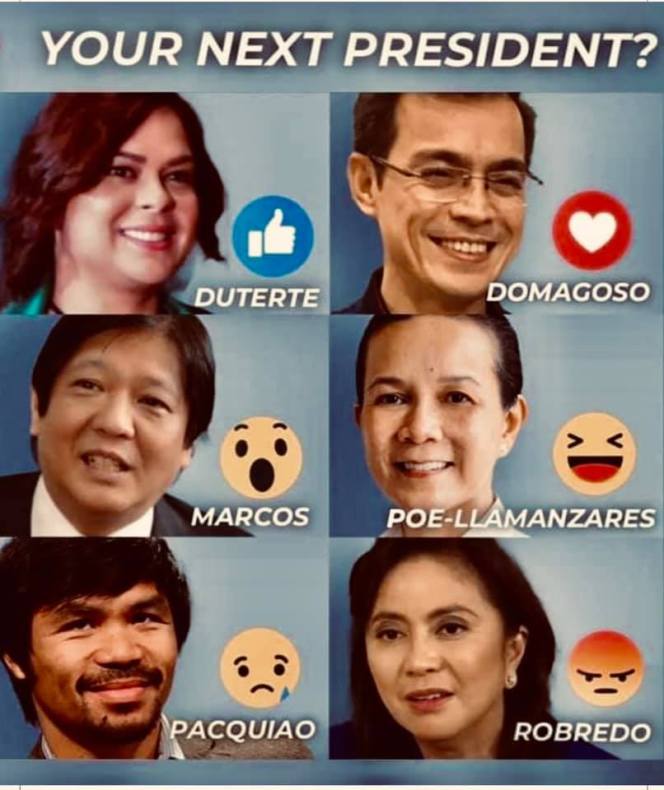 This informal survey was conducted through social media. Four of the featured aspirants are openly supportive of the Duterte Administration. Two contenders are considered to be on the opposite side of the political fence. Moreno, Marcos, Poe and Robredo are from Luzon while Duterte and Pacquiao are from Mindanao.

Analysis – This early, there seems to be an inclination towards candidates affiliated with the hugely popular Philippine President. In the recently concluded May, 2019 midterm elections the Otso Diretso senatorial ticket of EIGHT candidates including a then sitting senator (Bam Aquino) and a former senator (Mar Roxas), both very close to the previous Noynoy Aquino Administration, FAILED to secure a single seat out of the 12 senatorial positions to be filled. This ZERO senatorial performance by the opposition may be repeated in 2022, if elections were held today (meaning we are only dealing with known contenders today at the same time that newcomers can still make a good impression from now till the 2022 election day and that certain issues could crop up to reduce the Administration vote).

Since Sara Duterte has a huge early lead among the pro-administration presidential aspirants, these other contenders may have to reconsider their plans and slide down to a vice presidential run where they may have a better chance to win in a fight among themselves.

Cynthia Villar, Dick Gordon and Panfilo Lacson, sitting senators all, with experience as losing presidential candidates (in the case of Cynthia, it was her husband Manny who lost in 2010), may still play significant roles for 2022.