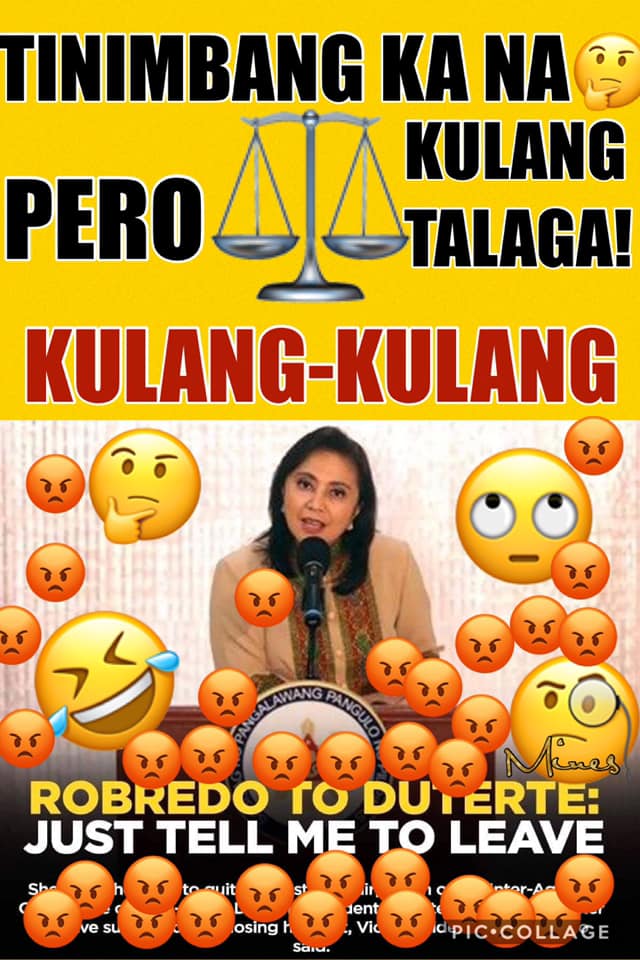 Leni was (and most probably will still be) a pain in the neck of the Duterte Administration with all her criticisms against the War on Drugs. So one day, the President offered her a position in the government anti drug campaign. There was the initial hesitation to accept the appointment as her opposition supporters sensed a trap. It was obvious that a rejection on her part would open her to charges of abandoning a chance to have her voice officially heard in the planning and conduct of drug raids and buy busts. There was the hair-splitting on whether she got a cabinet level post (she did not), the request for additional budgetary support, the consistent message that drug suspects need not die while being arrested and the consultation with international agencies. The Palace issued a warning that divulging state secrets to foreigners could get her fired. Then President Digong made mention that he DID NOT TRUST Leni to which the Vice President answered that if she was not trusted, why was she appointed in the first place. All these events played out in public view, in press conferences, speeches and interviews and it was obvious that the top two officials in the land had a wide gap in management style and perception on how to get the task done. Leni mentioned that she would not resign. Senator Kiko Pangilinan opined that it would be better for the President to fire Leni rather than for her to suffer from daily Palace tirades. In the end, the President had enough and did the only logical move in a messy situation that was dragging for many days – he FIRED her. Actually this is the second time Leni got the axe, the first time was as head of the Housing and Urban Development Coordinating Council in the first year of the Duterte Presidency.

Medialdea confirmed the termination with a one-word text message: “Yes.”

In a statement, Malacañang said that the firing “is in response to the suggestion of Liberal Party President, Senator Francis Pangilinan, to just fire the Vice President from her post. This is also in response to the taunt and dare of VP Robredo for the President to just tell her that he wants her out.”

Presidential spokesperson Salvador Panelo had earlier also characterized Robredo’s asking about her mandate as ICAD co-chair as “taunting” and “daring” the President to say he does not want her in the job.

“If VP Robredo wanted clarification in the scope and limits of her new task, she could have sought audience with the President, which she failed to do. As always, she talked—not with her appointing authority—but right in front of the cameras asking the President on her supposed mandate,” Panelo said in Sunday’s statement.

“If VP Robredo is really serious in addressing the cause of the drug problem, she should have gone down to the grassroots—talking to the victims, to their families, and to the communities. Instead, she opted to have audience with the United Nations and the United States embassy officials who remain out-of-touch from the realities of the local drug problem on the ground,” he added.

In the 18 days since Robredo accepted the post, she has visited Market 3 in Navotas City, a hotspot in the police’s anti-drug operations; met with reformed drug users in Dinalupihan, Bataan; and gone to a drug rehabilitation center in Quezon City.

GMA News Online has reached out to Robredo for comment.

‘A need to know everything?’

On Saturday, Duterte said that Robredo’s mandate as ICAD co-chair is indicated in the Executive Order (EO) that created the committee.

“She would be asking for the job description. It’s there in the law, it’s the EO creating itong ICAD. Nandiyan lang, basahin lang niya ‘yan, it’s all there and that’s where she would really exercise her duty,” Duterte told reporters.

“Is there a need for you, Leni, to know everything? I don’t think it’s good,” he added.

Duterte had said that he would make Robredo the country’s “drug czar” and give her law enforcement powers after Robredo criticized the administration’s bloody anti-drugs campaign, saying that it is not working since the number of drug users and traffickers are still rising despite it.

Robredo accepted the position on November 6, a day after Duterte designated her co-chair of the anti-drugs body along with Philippine Drug Enforcement Agency chief Aaron Aquino.

Just hours earlier on Sunday, Robredo said that while the President may fire her, she would not leave the post by resigning.

‘I cannot trust her’

Duterte has been critical of Robredo in the days since he appointed her to the position, saying he does not trust her and keeping the list of high-value drug targets from her.

He also said that certain information should only be given to her on a “need to know” basis.

He also threatened to fire her if she revealed “state secrets” after Robredo met with the United Nations Office on Drugs and Crime (UNODC), community-based advocacy groups, and US Embassy officials to discuss the drug problem in the country.

However, earlier on Sunday, Duterte apologized to Robredo for thinking that she had invited a US prosecutor and the UN to conduct a probe into the administration.

Asked if he sees Robredo as an ally of the administration’s drug war, Gamboa said: “Of course, oo naman.”

In his statement, Panelo said that Robredo “has not presented any new program that she envisioned to implement. In a campaign where people’s lives are at risk, a day is an eternity. The government can not twiddle its thumb and sit idly hoping for a flash of brilliance from the Vice President.

“It is time to put the issue to eternal rest and bury it in the graveyard of what could have been, as well as dismiss any obstacle that impedes the government to focus on the issue at hand,” he added. — BM, GMA News