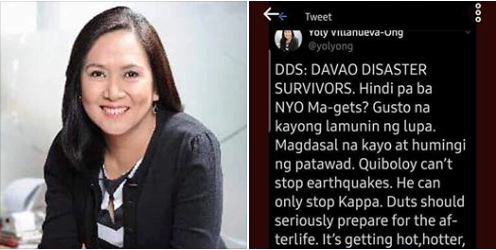 Yoly Ong, a top communications practitioner, got it all wrong with a series of statements that insulted the sensitivities of the Davao/Mindanao earthquake victims who she called Davao Disaster Survivors (a play on the DDS initials that mean Duterte Diehard Supporters). Yoly admonished the quake victims to make amends before it is too late so as to prevent more natural disasters (as in the earth swallowing them alive characteristic of really big ones) that she blamed on their popular support for the Philippine President (who she already judges to be HELL BOUND).

As she shed crocodile tears, she could not help but reveal a conspiracy to destroy her reputation thru an orchestrated and well funded campaign. She dug herself deeper by stating that she had nothing against ordinary citizens from Davao/Mindanao, her anger was directed only against the DDS (who did not deserve to be aided). Considering that the majority of the citizens in Mindanao are pro-government and thus could be labeled as DDS, then she actually insulted more people than she spared from her spite.

In the light of the fact that she is in the business of advertising, marketing, communications and public relations campaigns, she should have been the last person to be caught with her foot in her mouth. In fact, she should be the one to be advising politicians, celebrities and corporate executives on how to mitigate and minimize bad publicity. In this case she eagerly spewed fire and venom at a time when her opinion was not even being solicited. Yoly was right when she lamented she has “allowed” her politics to cloud her “better judgment” in the situation.