Navarro was Clarin Mayor. Reynaldo Parojinog, at the time of his death was Ozamiz City Mayor. His daughter, Nova Princess, was Vice Mayor. She is romantically linked to New Bilibid Prison top drug inmate, Herbert Colangco. The Parojinog raid killed not only Reynaldo but also his wife Susan, Misamis Occidental provincial board member brother Octavio Jr., sister Mona and Daryl, a nephew. His daughter Nova and son Ricardo, city councilor of Ozamiz City are currently in jail. This effectively neutralized or at least drastically immobilized the Parojinog family. Navarro and Sinacaban Mayor Cris Mahilac (also in the President Duterte drug list) have become social media sensations of sorts. Navarro with a multitude of top of the line designer handbags displayed by his wife and Mahilac with photos of expensive cars and the use of PHP 500 and 1000 peso bills as wallpaper in their mansion. 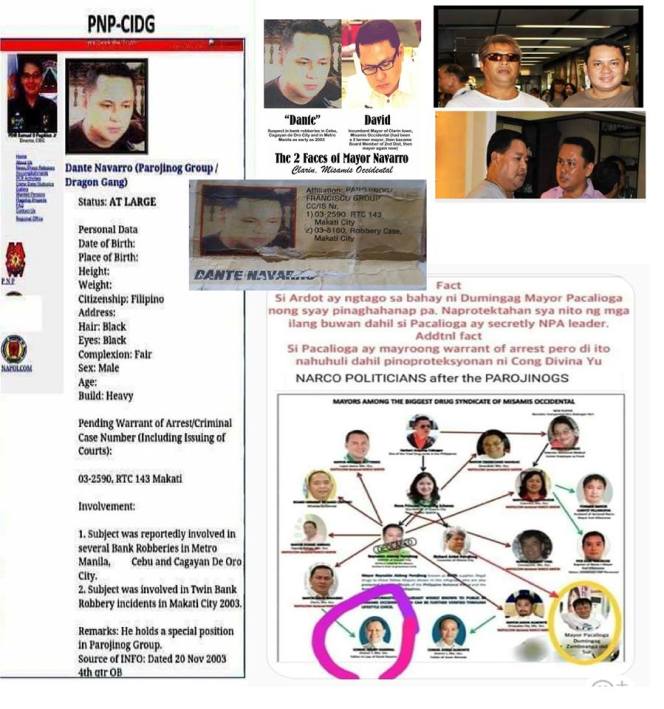 Nalzaro: Who ordered the killing of Mayor Navarro?

DURING the arrest of Clarin, Misamis Occidential Mayor David Navarro late Thursday afternoon, Oct. 24, 2019, at the Mactan airport, my source from the intelligence community alerted me to watch out because something might happen to Mayor Navarro. The source said Navarro was suspected of having a hand in the robbery that happened at J Centre Mall on A.S. Fortuna St. in Mandaue City last week. Most of the robbers who struck the mall came from Tangub, Misamis Occidental, a neighboring city of Clarin town.

Last Wednesday night, Oct. 23, a male and a female massage therapist in an uptown spa in Cebu City filed complaints against the mayor for physical injury and acts of lasciviousness at the Abellana Police Station. The complainants alleged that Navarro, who was drunk, entered their establishment and asked for a female therapist. But the manager refused to give him one as there was no available female therapist. The mayor then challenged everybody to a fistfight.

He then mauled John Dueñas, a male massage therapist. The mauling incident was captured by the establishment’s CCTV. The female massage therapist, who was sent by the manager to the room of Navarro in the same hotel where the spa is located, also complained because the mayor forced her to give him a hand job.

Upon the filing of the complaints, Navarro was arrested by the police as he was about to fly to Manila at the Mactan airport. He was brought to the Abellana Police Station early Thursday night. He stayed overnight at the station’s detention cell.

On Friday afternoon, Oct. 25, escorted by family members and a police team, Navarro was taken to the fiscal’s office to face complaints for physical injury and acts of lasciviousness. But before the group could reach the City Prosecutor’s Office on M. Velez St., he was shot dead while on board a van in broad daylight in a daring ambush by unidentified persons. Navarro was dead on the spot. One of his bodyguards and a police escort were wounded.

Navarro was one of the narco-politicians named by President Rodrigo Duterte last March. He was reportedly closed to the Parojinog family of Ozamiz City, the alleged leaders of the dreaded and notorious Kuratong Baleleng Group. Clarin is just 22 kilometers from Ozamiz City, whose Mayor Reynaldo “Aldong” Parojinog was killed in an anti-drug operation in his residence two years ago.

Who was behind the killing of Mayor Navarro? Was there an order from the higher up? Your guess is as good as mine.
***

This is a rejoinder to my Wednesday column entitled “Nagging questions in a mall heist.”

In a paid advertisement in the local dailies, M Lhuillier, one of those victimized by the robbery gang inside J Centre Mall on A.S. Fortuna St., Mandaue City last week, offered P500,000 as a reward to anyone who could give the company and law enforcement agencies information on the identity of the perpetrators that would lead to their arrest and prosecution and the possible recovery of the jewelry carted away by robbers.

The ad says “a group of robbers forcibly took substantial amount of jewelry and cash from the company in the evening of Oct. 18.” When you use the term “substantial,” it means a “considerable size or worth.” The amount is not certain. But how come M Lhuillier immediately claimed “that the robbers took some P50 million worth of jewelry” right after the robbery? That’s why I asked if the figure was accurate. Did the establishment tell the police the exact amount of cash and jewelry carted away by the robbers?
I am one of those who expressed suspicion that the figure was bloated by management for insurance claim purposes. I am not accusing the owners but the figure they presented could raise some eyebrows. Were there pure gold and diamonds on display? But the most intriguing thing was that of the P136 million worth of cash and jewelry allegedly taken by the robbers, not a single ring, bracelet or necklace has been recovered.