Daughter of KILLED couple said about 2 to 3 cops visited their house four times a week, bringing ILLEGAL DRUGS which her parents repacked and sold to the community. The daughter estimates that a total of 30 to 40 individual policemen went to their house in the span of more than a year. She was able to provide names (not revealed in open court) for some but had only physical descriptions for others. She also stated that during certain visits, the children were instructed to leave the second floor after which the policemen themselves PARTOOK of the ILLEGAL DRUGS. Note: The couple died 10 days prior to the new Duterte Administration taking office. The most logical motive for the deaths was an effort of the complicit cops to remove or reduce the number of their accomplices that could pin point them.

Another witness has testified at the Senate and implicated certain policemen in Antipolo in illegal drugs and possibly in the killings of her parents.

Twenty-three year old Mary Rose Aquino told the Senate committee on justice and human rights on Monday that some policemen had delivered illegal drugs for “repacking” to her father, Rodelio Campos, at their house in Antipolo.

Aquino said her father was a police “asset” until he was killed last June 20. Her mother, 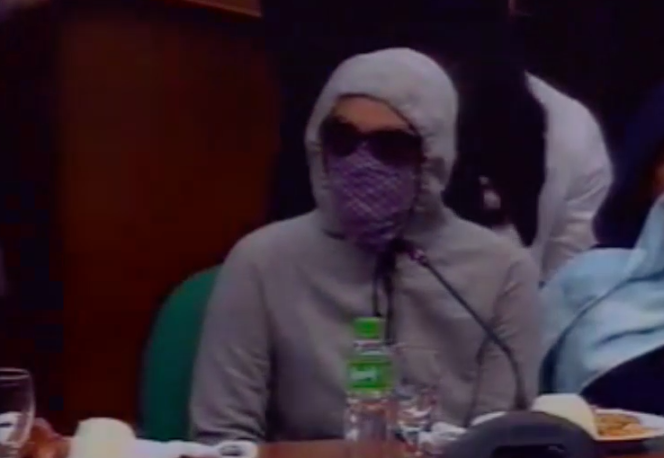 “Pinatay po sila, sinalvaged (They were killed, salvaged),” she said in between sobs, responding to queries of Senator Leila de Lima, chair of the committee.

She said she last saw her parents on June 20, after her father received a call from an angry policeman, whom she identified only as “Rabe.”

Aquino admitted that her father was a drug pusher and that her mother had accompanied him in their drug deals. Both, she said, were also drug users.

She said her father had been selling drugs for more than a year before he was killed.

Asked by De Lima where her father sourced the drugs, Aquino said: “Sa mga pulis po… ng Antipolo. Kilala ko po sila (From the police in Antipolo. I know who they are).”

Asked again how she knew that they were policemen, “Kasi po pumupunta po sila sa bahay. Inihahatid po nila yung droga sa bahay namin, pinapa-repack po sa papa ko (They would come to our house. They would bring the drugs to our house and have my father repack it).”

Aquino said she also knew that they were police because they were wearing their uniforms whenever they went to their house.

After receiving that call on June 20, Aquino said her parents immediately left their house to bring their “remittance” to the policeman. Two days after, Campos’ bodies were found in different locations in Antipolo.

But Senator Panfilo Lacson noted that the incident happened on June 20, or 10 days before the new leadership of the Philippine National Police (PNP) assumed post on July 1.

De Lima went on with her questioning and noted that in Aquino’s affidavit, the latter mentioned that the alleged involved Antipolo policemen did not only deliver illegal drugs for repacking to their house but they were also having “pot session” there.

Aquino confirmed her statement in the affidavit.

She said she had witnessed the policemen having pot session at their house several times. JE/rga