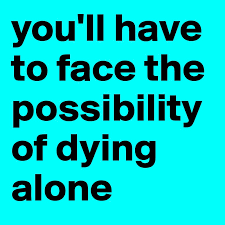 DYING ALONE does not necessarily mean that there is absolutely no one beside the patient at the time of death. There could be doctors, nurses, aides and orderlies, and in the case of dying health care personnel, they may have friends and co-workers there, but family members are now excluded from being present in the final minutes. No hugs. No kisses. No goodbyes. Few relatives would view the dead body as immediate wrapping of the cadaver is mandatory to try to contain the spread of the disease.

Coronavirus preys on what terrifies us: dying alone

(CNN) Steve Kaminski was whisked into an ambulance near his home on New York’s Upper East Side last week.

He never saw his family again.

Kaminski died days later of covid-19, the disease caused by the novel coronavirus. Because of fears of contagion, no visitors, including his family, were allowed to see him at Mt. Sinai Hospital before he died.
“It seemed so surreal,” said Diane Siegel, Kaminski’s daughter in law. “How could someone pass so quickly and with no family present?”
Mitzi Moulds, Kaminski’s companion of 30 years, was quarantined herself, having also contracted the coronavirus. She worried Kaminski would wake up and think she’d abandoned him.
“Truthfully, I think he died alone,” said Bert Kaminski’s, one of Steve’s sons. “Even if a doctor was there.”
As the coronavirus stalks victims around the world, one of its scariest aspects is how it seems to feed on our deepest fears and prey on our primal instincts, like the impulse to be close to people we love when they are suffering and near death.
In a painful irony, the very thing we need in moments of fear and anxiety could also kill us.
Many hospitals and nursing homes have closed their doors and placed covid-19 patients in isolation wards to prevent the disease from spreading. One doctor called it “the medical version of solitary confinement.”
Priests are administering last rites over the telephone while families sit helplessly at home.
The isolation extends beyond coronavirus patients. Amy Tucci, president of the Hospice Foundation of America, estimates that 40% of hospice patients are in hospitals or nursing homes, many of which have placed strict restrictions on visitors. Their families, too, are worried about loved ones dying without them.
“We crave closure,” said Maryland psychologist Dr. Kristin Bianchi, “so it’s only natural we would want to be there in our loved one’s final moments. We want to bear witness to that process and say our last goodbyes.”

‘Lonely deaths’ can haunt us

Something about dying alone seems to haunt us. To some it may suggest the deceased’s life lacked love and worth, and that in the end they were forgotten.
The Japanese have a word for this: “kodokushi,” meaning “lonely death.” In recent days, as funerals have been cancelled or postponed because of the virus, it can seem as if coronavirus victims simply vanished, like people in “The Leftovers.”
But some medical experts challenge the idea that scores of people are dying unaccompanied in hospitals right now. In many instances, they said, hospital staff are standing vigil by patients’ bedsides during their last moments.
It’s not ideal, they say, but they’re not quite the lonely deaths we may imagine.
As a lung specialist and member of the Optimum Care Committee at Massachusetts General Hospital, Dr. Emily Rubin is on the frontlines of the pandemic.
The hospital, where 41 employees recently tested positive for coronavirus, does not admit visitors except for limited circumstances, like births — and, in some cases, for patients near death.
But Rubin said the situation is evolving rapidly as the virus spreads. In some cases, the hospital may connect families and covid-19 victims electronically instead of in person. Other times, nurses and other hospital staff will step in to stand vigil.
“Even if the disease is too mighty, the ethic of not abandoning people is so strong,” Rubin said. “We feel like being present with people at the end of life is a huge part of what we do.”
“People in a hospital are not dying alone.
Still, shepherding patients through the last stages of life can take an emotional and physical toll on doctors, nurses and other hospital staff, Rubin acknowledged.
Dr. Daniela Lamas, a critical care doctor at Brigham and Women’s Hospital in Boston, wrote about that toll in a recent New York Times op-ed.
“The devastating image of the lonely deaths of coronavirus patients in Italy hangs over us all,” Lamas wrote. “Talking with one of the nurse practitioners in our hospital’s new Covid-19 I.C.U. one recent night, I asked what worried her most. ‘Patients dying alone,’ she replied quickly.”
But some hospice chaplains question notions of “lonely deaths,” saying that in their experience, some people want to approach the end by themselves.
“I don’t think dying alone has to always be a bad thing,” said the Rev. C. Brandon Brewer, a hospice chaplain in Maryland. “What we’ve done is make it into something that it doesn’t have to be.”

It takes away our end-of-life rituals

When we think about dying alone, we’re really talking about two separate things, psychologists say: The fear that people we love will die alone, and the fear that we ourselves will stare down death solo.
“It creates in almost everyone a sense of terror,” said Bianchi, of the Center for Anxiety & Behavioral Change in Rockville, Maryland. “We want to be be able to cushion the experience from what we believe will be a painful and difficult experience. We also want to be there because we imagine ourselves in that scenario.”
Often, it’s the people left behind who suffer more than the deceased, said Kerry Egan, a former hospice chaplain who has turned to writing essays and books. We want to be there to comfort and help the dying, she said, as if we could somehow alleviate their suffering.
“People feel a sense of guilt. What could I have done better? How could I have stopped this?” she said. “Part of that is just part of the normal grief process.”
This relentless pandemic, which brings deaths shockingly quickly, heightens the anxiety. Many people can’t get to their loved one’s bedsides to whisper last goodbyes or reconcile old grudges.
Secular and religious end-of-life rituals, too, have been stripped away. Hospice care, for example.
“Hospice is all about being able to provide an environment where people can review their life and say their goodbyes and their sorries and hold hands and kiss one another and then — poof! — all of that is just gone overnight,” said Tucci, of the Hospice Foundation. “It’s a nightmare.”
At the same time, many funeral homes have cut way back on memorials, burials and other rituals used to commemorate departed friends and family.
“Even when there are people around to support us during times of mourning, it can be an extremely isolating experience,” said Bianchi. “Take that, and then put someone into forced isolation, like we are now, and it can be absolutely agonizing.”

It happens too often to be a coincidence, hospice chaplains say.
Family members will maintain a constant vigil, spending hours, even days, by their loved one’s deathbed. And then, when they leave for a few moments to make a sandwich or take a shower, their beloved dies.
“There’s no coincidence in my mind,” said Brewer, the hospice chaplain in Maryland. “This is an intentional process.”
Egan agreed. “Ask anyone who has worked in hospice and they will have dozens of stories like this. “I think a lot of people want to die alone.”
In other words, there’s a difference between dying alone and dying lonely.
“Dying alone is not necessarily dying without love. It is simply in some cases the absence of another person in the room,” said Brewer. “And if that’s what someone wants, that’s OK. It doesn’t mean they were forsaken.”
In a certain sense, Egan added, we all die alone, even if we are surrounded by people we love. Often, as we die, our bodies are breaking down and our minds are elsewhere. The conscious experience of death is, by nature, solitary.
And the movie image of someone imparting profound last words upon his deathbed, encircled by his faithful family? That’s a comforting fiction, hospice chaplains said.
“That is not how it happens,” Egan said. “Many people are not responsive at the end. Their bodies are busy doing something else.”

This family said their final goodbyes by phone

Before Steve Kaminski died, a nurse practioner at Mt. Sinai set up a group call so he could hear his family’s voices one last time.
His face brightened, the nurse told family members, as each offered their tearful goodbyes or said, hoping against hope, that they’d see him when he left the hospital.
On a ventilator, Kaminski himself could say nothing.
When he died days later, it was a sudden and stunning ending to 86 years of vibrant life, said Bert Kaminski, Steve’s son.
But Bert Kaminski said he took some solace from a dinner he shared recently with his father and his father’s longtime partner. They went to a Vietnamese restaurant, drained a bottle of Merlot and then feasted on ice cream. His father was his usual bon vivant self, Bert remembers.
“People shouldn’t take it for granted that there is time to connect with them later, particularly older family members,” Kaminski said.
“This thing can come very suddenly. No visitors. No final words.”