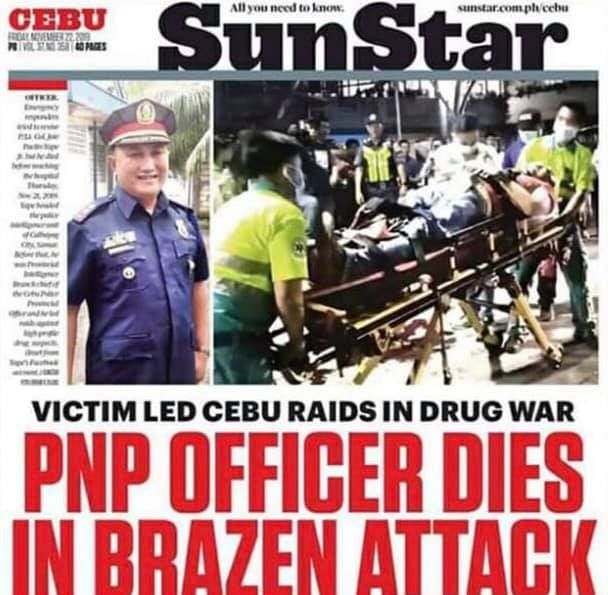 Did Yape’s dogged pursuit of criminals kill him?

BEFORE he was gunned down in front of his wife in Cebu City Thursday, Police Lt. Col. Joie Pacito Yape Jr. led the arrest of prominent personalities, including elected government officials.

Investigators are now looking into whether his dogged pursuit of criminals led to his murder.

“This is unacceptable. I’m ordering the City Police Office to thoroughly investigate, identify and arrest the suspects in this dastardly act,” de Leon said in a statement Friday, less than 24 hours after Yape was gunned down in Cebu City.

Yape, 49, was walking with his wife along Molave Street in Barangay Kamputhaw when he was shot and killed at 5:35 p.m. Thursday, Nov. 21.

Two men on a motorcycle, both wearing helmets, rode close to the couple near a hotel on Molave Street. The back rider shot Yape three times before they sped off towards Escario Street.

De Leon ordered the Cebu City Police Office (CCPO) to form a Special Investigation Task Group (SITG) to find the culprits behind Yape’s murder, saying this was the usual procedure whenever a member of the police force was killed.

The SITG will initially comprise units of the CCPO and the Criminal Investigation and Detection Group in Metro Cebu.

De Leon frowned on the return of motorcycle- riding gunmen carrying out ambush attacks in the city.

“I have given them (CCPO) instructions to broaden their information gathering so we can identify these guns for hire,” de Leon said.

The regional police chief believes Yape’s killing may have been related to his work, especially since Yape used to head the Provincial Intelligence Branch (PIB) of the Cebu Police Provincial Office.

At the time of his ambush, Yape was assigned at the Philippine National Police Internal Affairs Service (IAS) in Camp Crame in Quezon City. He was in Cebu City for a three-day seminar on law and procurement planning.

As chief of the PIB, he led anti-drug operations against high-value targets.

Ramirez was killed in his hospital room last June after 15 armed men stormed the Bogo-Medellin Medical Center where he had been held under hospital arrest.

CCPO Officer-in-Charge Col. Geovanie Maines, who is concurrently the deputy regional director for operations, said based on initial investigation, Yape’s assailants had waited outside the hotel where the seminar was being held.

Yape was also in Cebu City to attend an administrative hearing at 2 p.m. Thursday.

Maines said they will look into Yape’s work as Cebu PIB chief, during which he clashed with a number of big personalities.

He said that the hearing Yape attended at the Provincial Internal Affairs Service had to do with an administrative case they were facing in connection with an operation conducted in Medellin town when Yape was still PIB chief.

Lovely told Superbalita Cebu it was hard to tell who could have ordered the hit on her husband since even while still assigned in Cebu, Yape had already made many enemies.

According to Lovely, from Cebu, Yape was assigned in Southern Leyte province. He then became chief of the City Intelligence Branch of Ormoc City, Leyte and police chief in Calbayog City, Samar before he was assigned to Camp Crame.

Unidentified men shot Bas dead in Sibonga town in October 2018. Magsico Barangay Captain Arriesgado, who sat in the Municipal Council as Association of Barangay Councils president, met the same fate in San Fernando in January 2019, as did Donaire in Zambanga del Sur in February 2019.

Yape’s body will be brought to the town of Jimenez in Misamis Occidental for his wake and interment on Saturday, Nov. 30. (with TAP)