MANILA, Philippines – Seventy-five more mining contracts have been cancelled in an intensified government crackdown on mines deemed destructive to watersheds.

The cancelled contracts – representing almost a third of the country’s contracts for undeveloped mines – include the $5.9-billion Tampakan gold and copper project in South Cotabato, potentially the country’s biggest foreign investment and believed to be one of the largest gold prospects in the world. 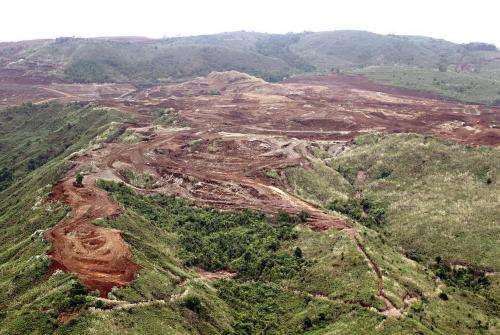 Department of Environment and Natural resources (DENR) Secretary Regina Lopez said she had to order the cancellation of the contracts because they were all in watershed zones and could endanger the water supply. The latest canceled contracts cover projects still in the exploration stage or otherwise not yet in production.

The move turns up the heat in her battle with the mining sector after she ordered the closure of 23 of the country’s 41 mines earlier this month on environmental grounds, causing an outcry among the industry and threats of legal action.

“You kill the watershed, you kill life,” Lopez said at a media briefing.

A long-time environmentalist, Lopez ordered the closure of the 23 mines on Feb. 2 for damaging watersheds and for siltation of coastal waters and farmlands. Five other mines were suspended.

The industry, represented by the Chamber of Mines of the Philippines (COMP), said the orders will affect 1.2 million people.

The contracts cancelled were mineral production sharing agreements (MPSA). Also affected by Lopez’s latest move was the $1.2-billion copper-gold project of Philex Mining Corp., one of the country’s biggest miners, in Mindanao.

In a statement, Philex said none of the areas covered by its Silangan Mining MPSA is located in a proclaimed watershed forest reserve where mining is prohibited. “Silangan Mining is therefore confident that its MPSA is valid and can withstand any legal challenge,” Philex said.

It added Silangan Mining secured its MPSA from the government “only after a thorough review process by all relevant government agencies and the endorsement of the host communities and local government units.”

Tampakan, meanwhile, failed to take off after the province where it is located banned open-pit mining in 2010, prompting commodities giant Glencore Plc to quit the project in 2015.

“We’re cancelling this as a gift of love to the people of Cotabato,” Lopez said.

There are currently 311 MPSAs including those for the 41 operating mines, government data showed.

“They were given MPSAs but after evaluation, we want to cancel it. Their MPSAs were given before my time and they are in watershed areas, how can I say yes? We can never benefit from those,” Lopez said.

“It’s the duty of the government to look after the people. We cannot say that their (investors) money is more important than the lives of the people,” Lopez said.

“If they want to invest here and rape the country, then I prefer them to go away. I’d prefer them to just go somewhere else, not here. We only want investments that will benefit us,” she added.

Lopez also disputed the ability of the country’s courts to halt her closure orders as affected miners prepare to take legal action.

“There is no TRO (temporary restraining order) that holds function in the case of environment enforcement,” she said.

“We would have suffered the food basket of Mindanao for nothing? Is it worth it? It’s not even an economic problem, it’s a peace issue. No wonder Mindanao cannot achieve peace, it is being ravaged,” the environment chief added.

The Tampakan project is an open pit mine the size of 700 football fields on top of agricultural lands.

As soon as she assumed the top DENR post, Lopez vowed to never allow Tampakan mine operations to proceed.

The DENR said the Department of Agrarian Reform has issued certificates of land ownership award (CLOA) to 3,000 families inhabiting the area where Tampakan’s open pit mine is to be located.

Operator Sagittarius Mines Inc. (SMI) has secured a declaration of mining feasibility and is a few steps closer to full operations. The Tampakan mine development had been targeted for operations next year.

Tampakan is estimated to contain 2.94 billion tons of mineral resources – 15 million tons of copper and 18 million ounces of gold.

The prospective mine is projected to produce 375,000 tons of copper and 360,000 ounces of gold per year in the initial mine-life of 17 years, with potential for mine-life extension.

The project site has an area of around 10,000 hectares covering Tampakan, South Cotabato, Columbio in Sultan Kudarat, Kiblawan in Davao del Sur and Malungon in Sarangani. The value of the mine’s production is estimated at $37 billion over a period of 20 years.

“DENR approved 37 MPSAs to do open pit mining in Mindanao. If mining is so good and done so well then why are  the poorest areas there?” Lopez said.

Despite outrage and legal threats from the mining industry, Lopez appears unfazed.

“The mining companies have accused me of bias. And I admit, I do (have biases) and these are healthy biases, for social justice and the common good,” she said.

Lopez has failed to get the nod of the Commission of Appointments (CA) but has been re-appointed by President Duterte.

“Mining money funds political campaigns and there are mining supporters in the Congress and Senate. I will not stop doing the right thing just to please the CA. Let the dice fall where it may,” she said.

COMP lawyer Ronald Recidoro said Lopez’s latest action was “absurd” and ignored due process, given MPSAs were contracts between the government and the companies.

“You cannot just unilaterally cancel contracts, especially if there are no specific grounds,” Recidoro said.

Mining law allowed operations in watersheds, he added, except those declared protected by the government.

But Lopez said it was within her discretion “to decide on the resources of the country.”

Top Philippine nickel ore producer Nickel Asia Corp. said it would pursue all legal remedies to overturn an order to close the operations of its unit Hinatuan Mining Corp.

Hinatuan was told that its operation has “impaired the functions of the watershed in the area,” according to a copy of the closure order.

The decision to close or suspend existing mine operations followed a months-long audit of the mines, although a government team that reviewed the audit recommended only suspensions and fines.

President Duterte on Sunday said he would not stand in the way of Lopez’s decision to shut several mines in Mindanao, the second time he has thrown his support behind the Cabinet official he appointed last June.

If Duterte upholds Lopez’s actions, Recidoro said affected miners could seek relief with the Court of Appeals and “then the Supreme Court.”

Meanwhile, a group called Philippine Business for Environment Stewardship (PBEST) has issued a statement criticizing Lopez for her “divisive” leadership.

“We live in one big ecosystem, where everything and everyone is interconnected. We need a type of governance that is inclusive, not just of the marginalized, but of all, including those perceived to be the ones destroying the environment,” PBEST secretary general Ysan Castillo said.

He said the DENR should focus on more pressing environmental issues. “The DENR keeps on challenging just the legitimate large-scale miners, and not the thousands of illegal small-scale operations,” Castillo said. “This is myopic, considering the host of other pressing environmental concerns that the country is facing.”

PBEST convenor and president of think tank Stratbase-ADRI Dindo Manhit said the environment department should unite stakeholders and not cause division.

“What we see here is a failure to transcend one’s single-cause advocacy, and a regulator who is supposed to look after and unite all the stakeholders for the good of the environment,” Manhit said.

“The sound management of the environment requires the involvement and cooperation of people and communities, not antagonism and animosity,” Castillo said.

Manhit added that the DENR leadership should complement the Duterte administration’s effort to improve the lives of the Filipino people.

“In order to fulfill this commitment, the President pushes for the country’s industrialization, and mining cannot be taken away from that equation,” Manhit stressed.

PBEST is a non-governmental organization advocating sustainable development through sound policies and collaboration among the government, private, academic and civil society sectors.

In its statement, Philex said the MPSA of wholly owned subsidiary Silangan Mindanao Mining Co. Inc. was included in the list even if the firm has not, to date, received any cancellation order or any notice of cancellation from the DENR or any other government agency.

The Silangan project is a copper and gold project located in Surigao del Norte in Mindanao, with an expected investment opportunity of P40 billion, Philex said.

“Mindanao is an area where President Duterte has declared his fight against hunger, poverty and underdevelopment. It is expected that, starting 2020, the Silangan project will, for the first 10 years of operation, generate P170 billion of revenues, P31 billion in national and local taxes and at least 8,000 employment opportunities,” it said.

Silangan Mining is also expected to spend P6 billion over the same period for social development and infrastructure programs that will benefit Mindanao. “The project will promote the much-needed development in an area which, in the words of President Duterte, has long been neglected,” it added.

Philex stressed it has a long-standing policy of strictly complying with all applicable laws and regulations, and especially those pertaining to social development, environmental protection and rehabilitation.

“While the DENR, as regulator, has the right, if not also the duty, to enforce faithfully all mining laws and to act against erring mining companies, it must do so within the bounds of the constitutionally-mandated due process procedure,” Philex pointed out.

It added the “confusion and uncertainty” triggered by Lopez’s pronouncements “has already resulted in significant economic harm” to Philex’s public shareholders, including the Social Security System and its beneficiaries, through a sharp decline in its share price – approximately P6.5 billion loss in shareholder value in one day – and has endangered the Silangan project.

It also cited the erosion of investor confidence “in the midst of a worrisome regulatory landscape that appears to disregard due process and interprets applicable laws as it wishes.”

Another Philex subsidiary, Philex Gold Philippines, Inc. (PGPI), has also been affected even if all its MPSAs were “validly issued” and the projects “not located in proclaimed watershed forest reserves.”

Philex and its subsidiaries, according to the statement, “are willing partners of the government in protecting the environment, and in its fight against poverty and unemployment, and in upholding the rule of law and supporting due process.”

It stressed it “continues to support President Duterte in his drive against illegal and irresponsible mining, and rally behind the President in promoting responsible and community-oriented mining.”

By Louise Maureen Simeon and Rhodina Villanueva  With Catherine Talavera