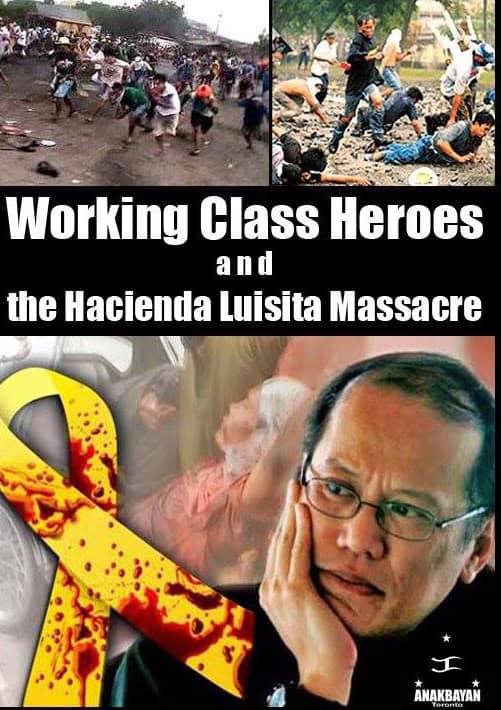 P-Noy, as he would later be called, concocted a fantastic tale to justify the killings in his family-owned Hacienda Luisita. In his figment of his imagination, which he stated in a speech at the House of Representatives, he blurted a dumb hypothesis – that snipers BEHIND the picket line (meaning fronting the law enforcers), shot the rallying farmers and supporters from the BACK. Since there was a huge media coverage of the event, lots of still and video photos were/are available for review and all of the shooting came from the state security forces. Aquino’s invented snipers could not shoot the protesters in the back since the victims were RUNNING AWAY from the lawmen. No credible investigating body from either side of the feud has dignified the then future President’s tale that only a certified LANDLORD can think off. Noynoying Aquino took pains to drive his point that while condemnation of the massacre was in order, he emphasized that the party pointed to, the law enforcers, was MISDIRECTED (meaning he believed his imaginary snipers did the shooting). Fifteen years after the fact, the grand theory of Noynoy Aquino is generally consigned to oblivion and gets dusted off during the massacre anniversaries or, more often than not, seldom mentioned at all.

Mr. Speaker, the Hacienda Luisita and a factory called Central Azucarera de Tarlac are both located in the Second District of Tarlac which I represent. A lot of people who worked in both firms are residents of my district although there are four other barangays that are also situated within the hacienda and are part of the Third District of Tarlac. Ever since all of these issues, the idea of retrenchment and so and so forth have occurred due to, according to the company, the distress of the company, we have sought ways and means to alleviate the problems of all our constituents to include not only the workers but also that of the companies that are located in our district, in the interest of serving all our constituents best. We would just like to manifest for the information of all our colleagues, a few days ago, perhaps, I am not sure of the exact date right now Mr. Speaker, but about two days ago if I am not mistaken, the PNP in response to an order, assuming jurisdiction issued by the Department of Labor and Employment, tried to effect a dispersal of a strike which in the opinion of the company and which is subject again of proceedings within the DOLE now was an illegal strike.

May I explain. According to the company, no strike vote was called for which is a prerequisite for calling a strike. Most of the workers of the union about 400 out of 736 have decided to take a stand against the so-called strike and have reentered the factory using various means like climbing the factory walls just to gain entry and evade the blockade by what was perceived as just a faction of their union who is not responding to their wishes. This is significant that in this latest labor dispute that the company is facing, most of the workers have decided to take a position which they believe is in their interest and their future interest. Now, consistent to that Mr. Speaker, a few days ago, I believe two days ago, if I am not mistaken, I am sorry, we have really been exhausted trying to resolve or come up with a peaceful solution to the problem, the PNP exercising maximum tolerance, decided to forego the use of tear gas, water cannons, and so many other devices open to them and just attempted to push out those blocking the entry and exit points of the factory premises, consistent with the deputization order coming from the Department of Labor and Employment.

As a result of this, those who were manning the picket lines, which up to this point, is being contested as not being made up primarily of workers of the hacienda, they were met by a hail of stones and various other implements resulting into the injury of these police officers.

The Regional Director, in his report to me, stated that they decided not to pursue with the dispersal operations given the premise that perhaps this can be settled with the very minimum violence was erroneous, and therefore, pursuing it would have resulted in further injuries.

To that extent, Mr. Speaker, today, new dispersal operations have been conducted. We, together with our colleagues from Bayan Muna and Anakpawis, condemned the violence that happened. But we are questioning as to whether or not the condemnation is directed at the right party.

The reports that I have been getting this whole afternoon, one of them stated that when the dispersal commenced this afternoon, elements of the PNP and the AFP were subjected to sniper fire allegedly coming from a barangay adjacent to the company premises. The results re, that of these men, the reports that we have gotten are: There are at least 10 who are injured on the part of the so-called picketing strikers—ten wounded, three have died and at least another three form the ranks of the government personnel, namely the PNP and the AFP, have also been injured.

Mr. Speaker, may I ask just one basic question to wind up this personal and collective privilege. We all here are lawmakers. Our main function is to make laws. I understand from our lawyers that I have consulted, for instance the blocking of factory premises is not allowable under the Labor Code. We have been asked to allow this continued blockade, which is already the source of numerous complaints from various small planters who are waiting to reap the proceeds form their panting of sugarcane and to which they have already been experiencing intense economic difficulties, compounded by the poor prices of sugar. We also are asking whether or not the rights of those who have chosen to adhere to the rule of law should be ignored, when it is convenient for certain factions to ignore the law. Is that the position we are taking, Mr. Speaker?

Also, consistent with the challenge that they issued to this Representation to join in the investigation of the so-called SDO (stock distribution option) arrangement, in compliance with the CARP law, we have co-authored, together with them and are awaiting the committee meetings of the Agrarian Reform Committee of the House.

In effect, Mr. Speaker, what I am trying to say simply put, is that as lawmakers I think we are the first who should be championing the adherence completely and faithfully to all the laws governing us instead of mainly complying when it suits us. This is a true situation that has escalated, and I will not name names at this point in time, Mr. Speaker, until I have gathered all of the evidence.

The primary responsibility for my district should lie with me, Mr. Speaker. And, unfortunately, there were certain quarters, who I will identify at a future date, who decided to exploit the situation, resulting in injuries and deaths to a lot of my constituents, which is believe calls for justice and I will champion that in due time, Mr. Speaker.

Thank you and good afternoon.