Senator Leila De Lima, in JAIL for DRUG CHARGES for more than a month now is showing signs of LONELINESS, DESOLATION and DESPERATION. Gone is her COMBATIVE and FIERY manner as she has turned to introspection and rationalization on why she landed in PRISON. She claims to be a RISK TAKER and that she took the chance of public ridicule when she admitted to an affair with her driver – bodyguard.  She did not say, however, that the rumor mill was already rife with such talk and witnesses had already gone public with the information. Continued DENIAL would have exposed her as a LIAR.  In the face of overwhelming evidence, ADMIT. She rambles on that she took a chance in running for the Senate on meager resources but there was no real risk in doing what many aspiring politicians have tried to do. Many lost in the elections but a few got elected anyway. She admits to taking the risk of investigating the Davao Death Squad when she was the Justice Secretary and when now Philippine President Rody Duterte was still a city mayor. There was not much risk to that since nobody could have predicted a Presidential run for Digong and a forthcoming SMASHING VICTORY at that.

In other words, De Lima is on an ADMISSION spree. Admit this and ADMIT that. The only issue she has to address is whether she RISKED SOLICITING and TAKING DRUG MONEY to fund her senatorial campaign. In the FINAL ANALYSIS, ADMITTING to being a DRUG PROTECTOR in exchange for MILLIONS of pesos is the only significant ADMISSION she would ever have to make in her life. She can then be free of a GUILTY CONSCIENCE and take her chances with the judicial system. A GUILTY PLEA can be used to haggle for a shorter sentence. A DENIAL PLEA has no risks, many criminals do it all the time. If she is really a RISK TAKER, why can she not TELL THE TRUTH and just accept the consequences of her DASTARDLY DEEDS. There is a Biblical saying that “The TRUTH shall set us free”.  While this may not mean freedom from JAIL in the case of the Senator, in a philosophical way, stating the TRUTH, the WHOLE TRUTH and NOTHING BUT the TRUTH could mean a good night’s sleep for De Lima (while still in PRISON, of course). 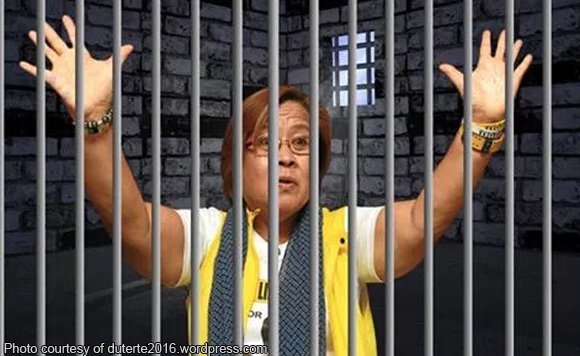 When she publicly admitted her past relationship with former driver Ronnie Dayan, detained Senator Leila de Lima knew that people would not understand her and judge her negatively.

But she had no regrets, De Lima said.

After being in detention for more than a month now, the senator has realized the many risks that she has taken that eventually landed her in jail.

De Lima was arrested and detained at Camp Crame last February 24 for her alleged involvement in illegal drugs.

“I believe in honesty and authenticity. I abhor superficiality, pretensions and hypocrisy. What you see is what you get,” the senator said.

She said she took a risk when she ran for the Senate during the 2016 May elections “despite very meager resources” and her “vulnerability to retaliation or vendetta from powerful personalities who might have felt “wronged by my official actions in previous capacities.”

De Lima was justice secretary before she won a seat in the Senate.

At the Senate, she said, she took a risk when she initiated a Senate inquiry on the spate of killings of suspected drug offenders “ignoring the contrary advice of well-meaning friends who deemed such initiative of mine as suicidal” given President Rodrigo Duterte’s high popularity and “patent intolerance to dissent.”

“I took a risk when I publicly admitted a previous relationship, knowing that people would not understand it and would thus judge me negatively about such episode in my personal life,” De Lima said.

She was apparently referring to Dayan, whom she earlier admitted having an affair with.

Like De Lima, Dayan was also arrested and detained for alleged drug links.

“I took a risk when, rather than heeding suggestions to seek political asylum in a foreign country, I chose to face head-on my persecution and consequent illegal arrest, boldly proclaiming to the whole world that I’m honored to be a prisoner under this repressive regime,” she said.

“No regrets. Being honest with oneself is far better than losing one’s soul,” the senator added.

De Lima has repeatedly denied allegations that she was in anyway involved in the illegal drug trade. IDL/rga